Guns on the Clackamas 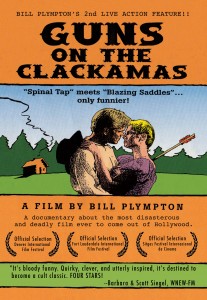 This is a dark documentary about the filming of a disastrous imaginary Western, full of depth and laughs. Inspired by the 1937 Western “Saratoga”, a film completed with stand-ins after its star, Jean Harlow, died during filming. Join Nigel Nado as he investigates what went wrong during the filming of “Guns on the Clackamas”, which lost nearly its entire cast to bad catering mishaps and on-set accidents. Bill Plympton’s 2nd live-action film, this mockumentary was shot very cheaply in Oregon and NYC in 1991, featuring a host of Bill’s friends and regular cast members and a cameo from acclaimed director Gus van Sant! Filled with crazy actors, in-jokes about casting and production and tons of “sad eye” art!